skip to main | skip to sidebar

Recognize your summer workers, teachers, and volunteers with handmade cards created by your students. 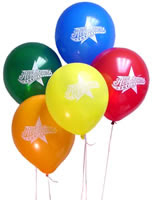 Give each child a half sheet of construction paper. Hand out markers, glitter glue, puff paints, scissors, and stickers. Talk about some of the people in your church who serve God on a regular basis or who have served during the summer months (missionaries, pastors, teachers, music leaders, custodians, volunteers, etc.)


Explain that each child will make an appreciation card to give to some of these Christian servants, showing them they are appreciated. Print some Bible verses on the board for the children to include on their cards. As they work, have a volunteer read Mark 10:44 aloud. Explain that this verse teaches that the greatest people in the kingdom of God are those who serve. Say a prayer of thanks for each of the workers and their ministry. 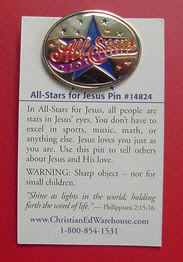 Tell your students that Jesus is our best example. He came to give His life for us and to save us from sin. Invite any children who want to accept Jesus as Savior to talk with you afterward. Distribute the cards during the week along with a large candy bar, an All-Stars for Jesus Pin (item #14824), or a couple of balloons (item #14820) to each worker.

Play this game outdoors or in room where water can easily be mopped dry. Set two clear plastic cups at one end of the play area. Set two buckets of water and two sponges at the other end of the play area. If you have a large group of students, set up more buckets, sponges, and cups. Divide the children into two or more groups. Line up the groups behind the buckets.

Have one child read James 1:5 from the Bible. Say the verse together a few times as a group. Encourage the teams to memorize the verse and help each other out if anyone forgets the verse during the race.

Parable of the Sower Puzzles

Let your students do a couple of fun Parable of the Sower Pencil Puzzles for your Sunday school or Bible club program.

Give each child a pencil and a copy of each puzzle. These two puzzles come as one download you can purchase for just $1.99 for the set of two. Choose either the KJV or the NIV version. Then print as many puzzles as you need. The first puzzle is a simple word search (pictured). The second puzzle is a picture puzzle to help your students review the Bible story. Answers are included in the download.

As the children work the puzzles, talk about ways they can tell others about Jesus this week, sowing the seed of God's Word.

Make sure names are on the puzzles after they are completed. Have a child read the memory verses (Psalms 34:8 and 39:12) aloud. Say them together a few times. Then let each child have a chance to say the verses individually. 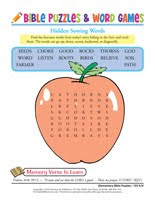 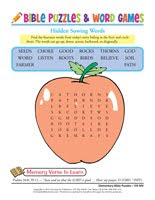 Click on the image above to download the Parable of the Sower Puzzles.
KJV is on the left and NIV is on the right.

How to Recruit Preschool Leaders

How do you recruit preschool leaders for your Bible club and Sunday school programs?

Prayerfully and with a lot of help! This is a big job, so meet with your Christian education director, children’s pastor, Bible club director, or Sunday school superintendent. Begin with prayer, asking the Lord to direct you to the people whom He wants to teach your precious preschoolers. Ask Him to prepare the hearts of these people to be receptive to becoming leaders or helpers in your preschooler program.

To ensure your preschoolers the very best experiences in your programs, look for leaders and teachers with the following qualifications:
• Dedicated Christians who seek to live for Christ daily, who study God’s Word, and who know the plan of salvation
• Are tuned in to preschoolers, and able to build upon their natural interests
• Enjoy sharing in the children’s joy of discovery
• Are warm, outgoing, and have a genuine love and sensitivity for preschoolers
• Appreciate and seek to follow God’s command to teach children
• Have a basic understanding of preschoolers in terms of their physical, mental, and emotional development as well as their spiritual needs
• Are reliable and disciplined to prepare for each task
• Are suitable role models for preschoolers
Make a list of qualified people who might be interested, and make an appointment to visit them in their homes or at church. Explain your preschool program and the responsibilities of a preschooler leader or helper. Ask him or her to pray about the decision, and leave some preschool Bible club materials, a Getting Started Manual, or a Leader's Guide for review.

It is good to involve a variety of people in working with your preschooler program: fathers, grandmothers, grandfathers, college students, or adults with older children may all enjoy working with young kids. Make a concerted effort to get men involved in the program—particularly fathers of preschoolers. They will love it, and so will the kids. Having male role models often helps to reduce discipline problems, too.

One children's pastor says that he only selects FAT teachers for his classes:
F aithful
A vailable
T eachable!

Organize a list of “substitute” teachers from which to draw in case a regular leader or helper is unable to attend at any time during the year. Be sure to fill each vacancy as soon as possible.

There are most likely people in your church who aren’t available on a weekly basis or don’t want to be tied to a schedule, but do like to help when presented with a special need. These are the people who can help you by preparing craft materials, cutting out visuals, updating bulletin boards, decorating the Bible club rooms, praying for leaders and students, or making or providing snacks. Throughout the process, ask God for direction and guidance. Pray with each person you invite to be part of your Bible club team. Give each one specific guidance and instruction so he or she understands exactly what the responsibilities will be. Then show your appreciation for their help, just as you show your appreciation to your regular leaders and helpers.

Thank God for bringing each person to your Bible club program. Spend time in prayer together before beginning each new quarter of your Bible clubs. Thank God for the blessings He has provided and ask for His guidance and wisdom to overcome any challenges.

The leaders are the most important part of your preschool program-not because they do everything themselves, but because they are the only means through which children can be truly involved and discipled. The most successful preschool group is usually the one where the adult leaders do less so the children can do more. This is the toughest kind of leadership, but it's the kind that produces disciples and leaders in your preschoolers.

Before your lesson on prayer, print the bookmarks below onto heavy paper or card stock. Provide markers, a hole punch, and 8-inch pieces of yarn. Cut apart the bookmarks so you have one for each child. During the lesson, have a child read Psalm 5 aloud. Talk about how God hears and answers our prayers. Talk about how prayers do not have to be fancy or use big words for God to hear them. Have everyone say verses 1 and 2 of Psalm 5 together a few times. Then give one bookmark to each child who can say the verse from memory (with your help). Help the child punch a hole in the top of the bookmark and add a yarn tassel. Make sure names are on the bookmarks before they are collected.


Close with a time of prayer. Mention any prayers that have been answered during the week. Let each child pray for another one. Encourage your students to talk to God in prayer throughout the week.
The NIV or KJV version bookmarks are available for purchase for only $1.99! You can print as many as you need for your students. 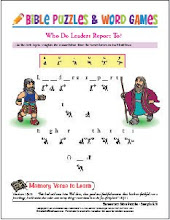 Where Are Our Visitors From?